I’ve been thinking about doing a video specifically on peated whiskies that aren’t obnoxiously offensive to folks who prefer the sweeter side of scotch and here it is! I teamed up with Steve (@TheWhiskyWatch) to get a new set of videos for your optical and audio pleasure.

Let me know what you think! Where do you stand on peated whisky? How do you like the new second camera angle? 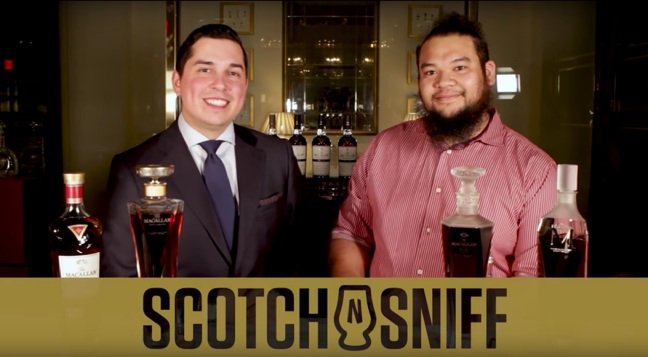 Today we’ve taking a small video adventure with Macallan national brand ambassador Nicolas Villalon. I really hoped that this video would be educational, accessible, and not overwhelming to a beginner whisky enthusiast… let me know what you think in the comments below or on YouTube!

Are you looking for some new whiskies? I sat down with The Whiskey Library DC to talk about the bottles that were released this year. Have a quick listen to our thoughts and let me know if you’ve found any of these and what you think of them!

A few weeks ago I got an opportunity to indulge in some of the most expensive whiskies available from The Macallan. It was a dram come true for many a whisky lover. The No 6. The M. The dream. Just when I thought I had woken up, like the movie Inception, I must have been subject to a dream within a dream. Even with the first kick of leaving the Macallan event, just a few short weeks later, I found myself drinking one of the most expensive whiskies to have ever existed.

Some would argue that no whisky is worth that price of admission but for something distilled in 1952 only to be disturbed again in 2002, it’s hard to say that the cost per bottle wouldn’t be astronomically high considering the years of storage, care, and the angel’s share.

The color was a dark red. So dark red that it looked black any time you were looking at the edges of the dram in direct light. It was impossible to see through the bottle.

The nose had hints of fruit sweetness and actually made me believe that the pour would be on the lighter side of the palate. I was expecting something more typical of Balvenie’s signature profile but I am so glad I was wrong.

Uncharacteristic of Balvenie, the palate was an explosion of flavor. It’s typical of older whiskies that they can lose a lot of vibrancy and life from so many years in the cask but this 50 year old was alive and kicking! David Stewart, MBE., continued to try and assure me of the sweetness that I was tasting but my palate disagreed quite a bit. Yes, about 25% of what I was tasting was similar to raw sugar but the other 75% of the palate was definitely filled with spices. It wasn’t over whelming but it was definitely in your face. Amazing.

The finish was soft and unassuming, not too short and not too long.

I’m not sure what my brain was expecting beyond the honeyed and softer notes we’ve come to expect from Balvenie as of late but I definitely didn’t mind being surprised. This was bold. This was borderline brash. This was brilliant.

I’m so thankful that I had an opportunity to try it. It was certainly once in a life time and lately I’ve felt like I’ve been living enough to last a few.

Without further ado, my video interview of David Stewart, MBE. is below along with pictures from the event.

[The setup for the interview]

[A little group picture action! (thanks Jason for snapping this)]

[Eric of @ScotchAndTime being ridiculous :P]

[Tim of @Whiskey_Library_DC with DCS MBE]

[Raising a toast to @theScotchFather]

[Tracie (@GlenfiddichTF) exchanging a glance with Jen H. of Momentum who handles the marketing for WMG&S in the DC area!]

[All eyes on David]

So we’ve definitely been working on more posts but haven’t had a chance to publish them yet. Until we get around to that, enjoy this video!

We finally took our tasting method and put it into video form! Hopefully this video is the longest we ever have and hopefully it does a great job of walking you through the whole CNPF process 🙂

Let us know if this helps you!

We’re back with our second video and it’s about bottles that are sought after purely because of the hype that follows them. Take a look and let us know what you think! (Or better yet, subscribe to our youtube channel and follow us a little more closely!)

We’ll be releasing videos every two weeks until we can magically grow time to shoot more and shoot more often. 🙂

"What's the dill, pickle? Everything Kosher?" -A Former Boss I Had That Thought He Was Hilarious 😂 • Happy Friday friends, one and all!! If you're alive and human (sorry zombies), we are in this together! Cheers to the weekend!! 🥳 • • • #HappyFriday #BuffaloTrace #KosherEdition #TwoLights #GodoxAD200 #NikonLife #ThanksSam #HaveYouSeenThisBefore #Stoked #Namaste #WhiskeyPhotography #WhiskeyPhotographer
I've started a show called "Upload" and uh... I'm gonna go binge s'more while sipping this magic 😉 • (Are you in the middle of anything??) 🤔🤔🤔🤔 • • • #SMWSA #SMWSA26_128 #SaltyChalkMallow #WhiteBowtie #SingleCask #SingleMalt #ScotchWhisky #Scotch #Whisky #ThirstyThursday #WatchingUpload
Thanks to quarantine, I've really been digging whiskies that aren't quite as mainstream as most of my feed tends to be. 👏 • Swipe to see today's magical bottling. I'm surprised by how much sweet citrus dominates this nose and palate but who doesn't like oranges? 🤤 • Have you been trying any oddball whiskies as of late? 🤔🤔 • • • #Amrut #Naarangi #AmrutNaarangi #IndianWhiskey #ItsNoIntermediateSherry #ButItIsGood #WhiskeyWednesday #PourShot
In a totally blind taste test recently, I confused this bottle for the Balvenie 12 doublewood. I'd swear the amount of sherry I taste in the current Glenfiddich 12 is more than I have ever tasted in it before. Kinda cool. 🤗 • Have you ever noticed a GOOD change in newer batches of your favorite whiskies? 🤔🤔 • We focus a lot on brands changing for the worse but sometimes they do listen and they do try to make sure that their biggest fans stay that way! 👏 • • • #Glenfiddich12 #TheBowTieIsBackBabyyyyy#BowtieWhisky #KISS #KeepItSimpleStupid #TuesdayTipple #WUToday #PizzaIsTheTopic #😂 #Hashtag
"Greater love has no one than this: to lay down one's life for one's friends." 🙏 • Thankful for the sacrifices of those who came before us. 🙌 • #MemorialDay2020 #NotEveryoneComesHome #ThankYouForYourSacrifice #FreedomWasNeverFree