If you’re on your whisky journey and you’ve never explored some of the independent bottlings available in the market, I encourage you to give them all a try. From Duncan Taylor to Classic Casks to Black Adder, many of these independent bottlers (IBs) have the incredible goal of offering something unique and exceptionally good to the public from distilleries that might not normally bottle in the style that the IB has chosen. Picking a single cask to showcase a distillery is part of the magic that IBs bring to the table since most distilleries actually vat or “marry” a number of barrels to consistently create a specific house style. 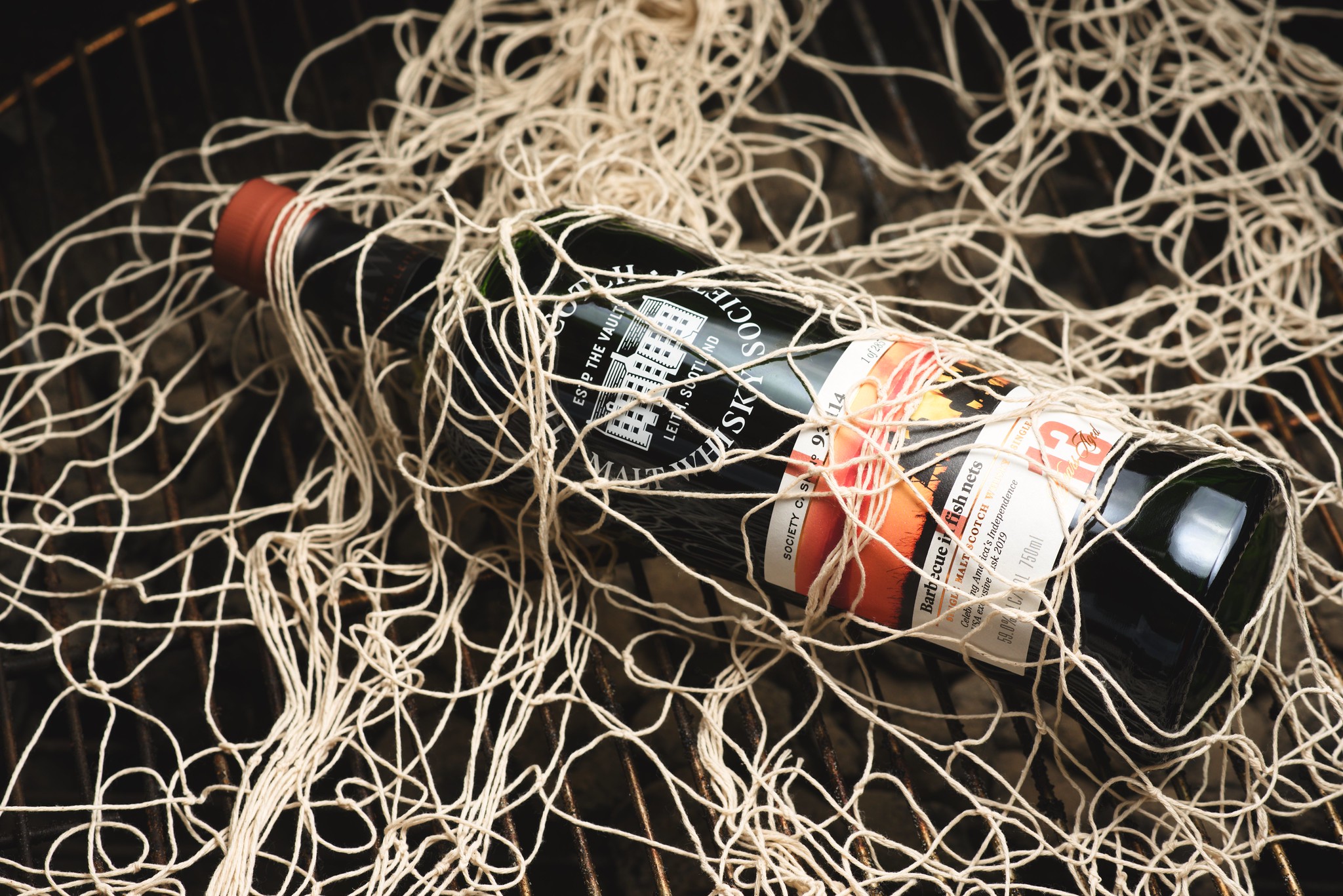 The Scotch Malt Whisky Society is a membership based IB that essentially pools resources from its membership base to pick and purchase hundreds and hundreds of unique single casks from well known (and lesser known) distilleries all over the world. Recently they decided to release a single cask pick (chosen by the infamous Ben Diedrich) to celebrate America’s independence. The bottle was only offered in America and I was lucky enough to grab one before they sold out. Almost everything from Glen Scotia seems to sell out really quickly as the distillery has some rabid fans! 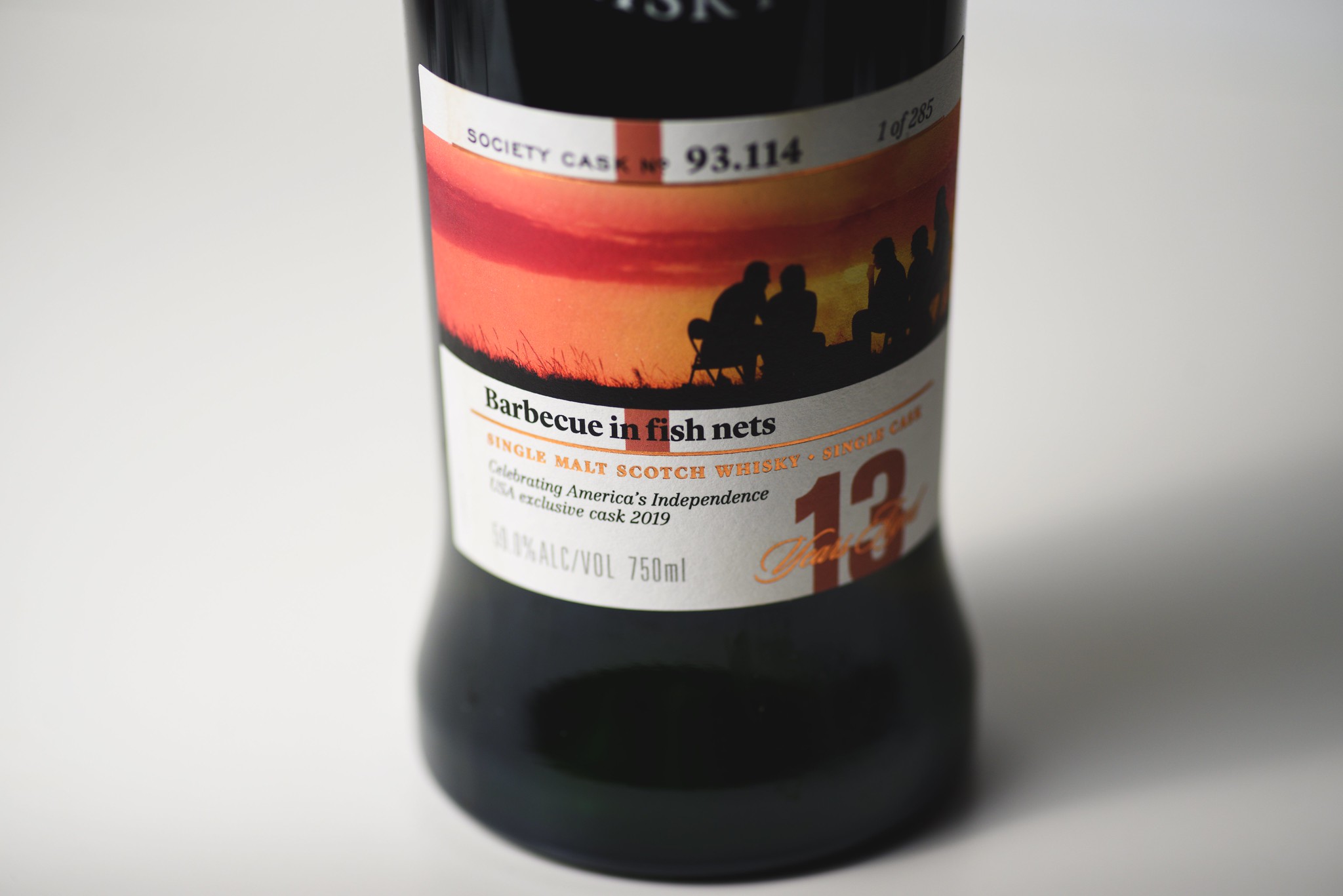 I’m not one who typically enjoys whiskies from Campbeltown but one of the most endearing traits about single barrels is their ability to breakaway from the norms of a region. This bottling is no exception. A 13 year expression aged in a first fill port cask makes for a truly unique scotch whisky. Let’s dig into it! 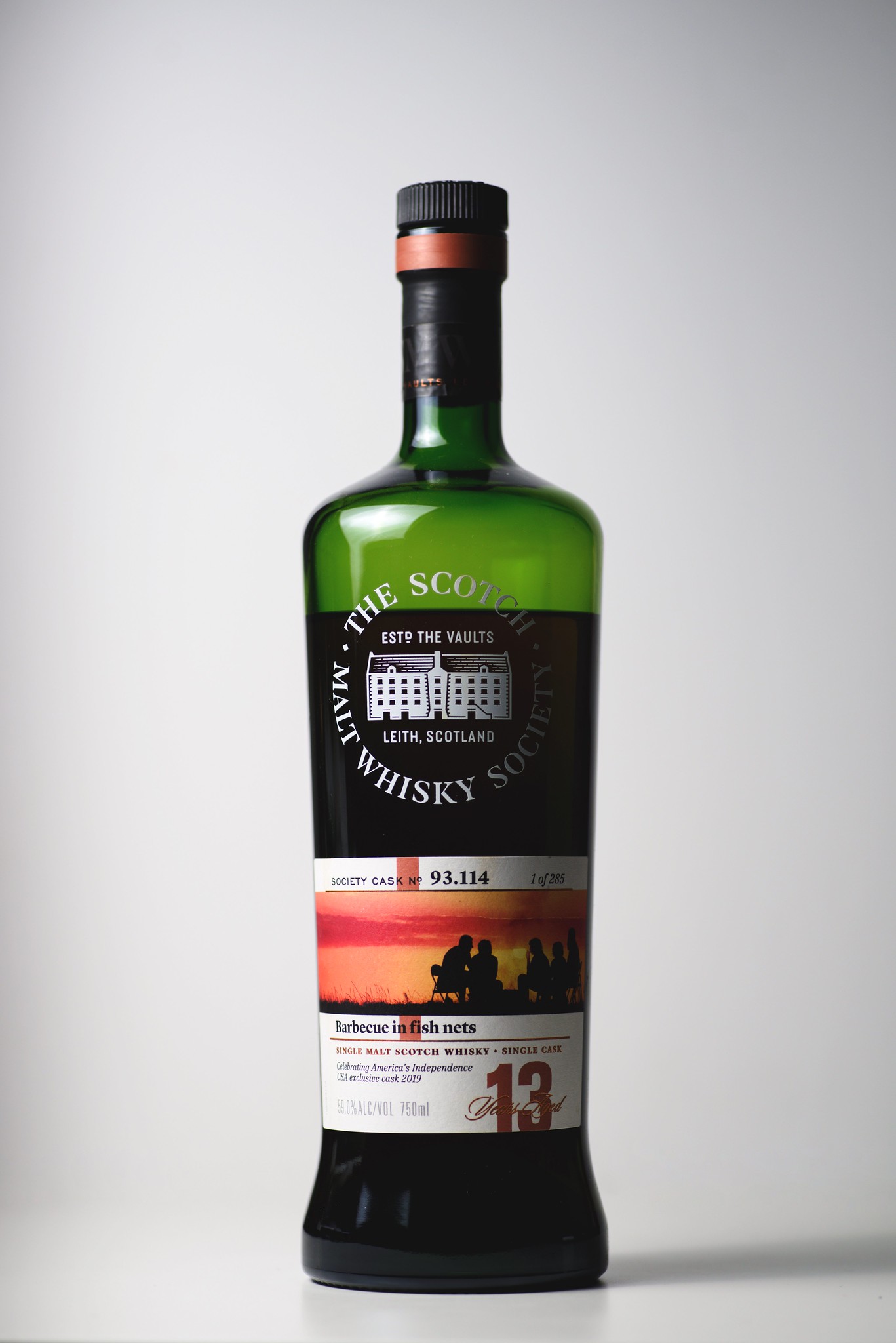 COLOR
A rose hued toasted straw in the glass. It’s quite gorgeous.

NOSE
Sweetened light peat with quite a bit of salinity. There’s a shortbread buttery sweetness I keep finding with a touch of milk chocolate. With water, the nose turns into the caramel sweet of port and a bit of dark fruit. What a way to build anticipation! 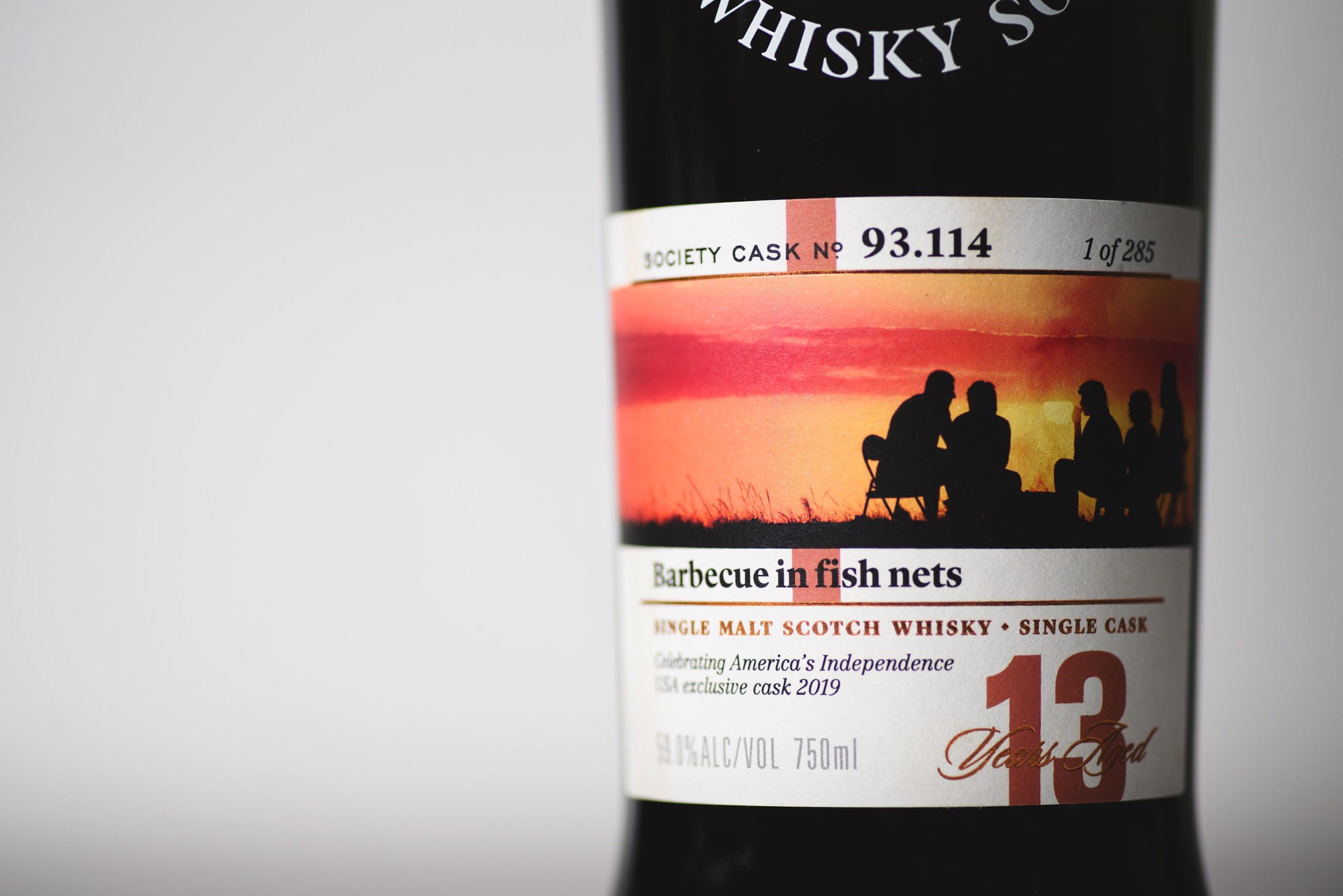 PALATE
Initial notes of plum and leather are interesting on the palate and they last until you take a breath where the finish starts it’s process. Oh man. With water, this gem shines! Fresh pan fried bacon drizzled in just a bit of plain maple syrup! Whoa… delicious bacon without the normal offenses of a peated whisky! This is magic!

FINISH
The finish carries all of the heat, neat. A bit of water destroys the hot edge of the meat finish and replaces it with a bit of peppered bacon grease.

I love the sweet bacon without the typically accompanying flavors of tongue destruction. THIS is what peated whiskies should strive to provide more often! This easy to love and balanced dram is a fantastic example of the goodness that an IB can offer to the world of whisky. It makes me glad to be a member of the SMWS! (We’ll see if I renew lol)

Have you tried this? Are you a member of SMWSA? Let me know and let’s talk about it!

Whisky Extravaganzaaaa!! With a name like that, it HAS to be good, right?

Whisky Extravaganza was a paid event organized by the Scotch Malt Whisky Society. If you’ve never heard of the SMWS, they are a Scotch enthusiast organization known for their single cask bottlings from distilleries all over Scotland. The most interesting detail about their bottlings, is the lack of distillery identification. Each of their bottles is labeled with a bottling number, age, and region instead of a more typical distillery, age, and other small details. They really have a penchant for putting the truth about taste first, forward.

Thanks to their efforts, there were more than 69 distilleries represented and easily over 200 bottles to sample from. The $150 ticket granted access to unlimited samples, excellent dinner and dessert, a free cigar, a tasting glass, and reading materials. If you signed up early enough, there was a master class that offered information and education about a handful of distilleries around Scotland. Those things were the gist of the event, but was it all worth the price of the ticket?

Right off of the bat, I’ve got to say, if you’re typically on the hunt for value, you can look to either expand your experience or decrease the costs to increase the value of your time at an event. Both can be achieved at the WE. Thanks to the internet (and google more specifically), finding discount codes to save 10% of the listed ticket price is pretty easy to do. If you’re as diligent about when you buy your ticket as you are about how you buy your tickets, you’ll get your tickets early enough to get offered a chance to sign up for the master tasting classes offered by Laphroaig and ImPex beverages group. #Winning. [Scotch] and I signed up for the ImPex master class and were able to sample offerings from Kilchoman, Arran, and Tamdhu. Fan-freakin-tastic.

Our master class was hosted by a Mr. Jared Card and he was hilarious. A down to earth gent (in a kilt no less) who really helped folks in the room feel a great connection to the distilleries he represented. He seems especially close to the family that runs the Kilchoman distillery and shared some scandalous stories that “aren’t to be repeated” in any capacity. 🙂  He walked us through the profiles of each of the samples we had and did a great job with information about how to acquire any of the samples, quickly and efficiently. The master class was slated to last and hour and we ran up to the 55 minute mark which was VERY good for us…

Thanks to the master class finishing early, we were able to enter the WE main tasting room a little early. [Scotch] had already screened instagram of past Whisky Extraveganza events for the most coveted samples available and we immediately made our way to the table offering the ever so rare Ladyburn 41. At $1900 a bottle, we were lucky enough to have no line, no wait and just a nice and quiet tasting of a wonderful dram. There was only one bottle to be sampled by every attendee who got there in time. Wowzers. As quickly as we were able to finish the Ladyburn, other attendees began to trickle into the room.

A day or two before we arrived at the venue, [Scotch] spoke with Allison Patel (the founder of cognac finished Brenne whiskey) about stopping by and saying hello and so we did. She was a peach! We caught her just as she was finishing the setup of her table and got to talk to her about a new offering she has, the Brenne 10. It was our second sample of the night and it was fantastic. Not as bubblegum as the original Brenne offering, the 10 is MUCH more complex. We exchanged a few more thoughts and words and then we were off for more samples! (I’m always amazed at how approachable most people who do amazing things are.)(We’ll have an interview with the founder coming up in future blog posts, so keep an eye out!)

As we made our way around the room, we tried all kinds of bottles that we either had never tasted, seen in person, or even heard about. This kind of tasting is a great way to try bottlings you might be interested in, but might not want to spend money blindly on. The Jack Daniel’s Sinatra was a good example of this. I was hoping it would be a more complex rendition of the single barrel but the extra grooves in the barrel seem to have imparted a bit too much oak into the pour. $175 saved! But the Kavalan? Incredible!! Bravo Taiwan! Now where can I find some!?

(There were plenty of water bottles and “spit buckets” to rinse your tasting glass out between samples. The last thing you want is some peaty beast ruining the flavor of your speyside neighbor!)
At some point during the night we got to sit down and eat some of the great food and got to converse with a young couple about scotch. They were awesome. The conversation was a great reminder to us about the importance of what our goals are. We want to help make scotch more accessible to all people and get rid of some intimidating stigma. The demographic of the room was very obvious, but we really believe that the flavors and magic in scotch can be had and enjoy by all. The couple we spoke with, reminded us that we all want to avoid buyers remorse and the key to doing that is education. Increasing the amount of information we can get about a bottle before buying it is critical for everyone’s wallets! 😉

After dinner there were more tastings and then dessert and then more tastings lol. It was a ton of fun. It was worth the price of admission and definitely an educational experience. We left refreshed and ready to get some more reviews up to bring you value and save you the sadness of a bottle not enjoyed. I wish we could offer a discount to local stores for those who are champs and read through this entire post but we’re not quite there yet. We’ll get there! 😉