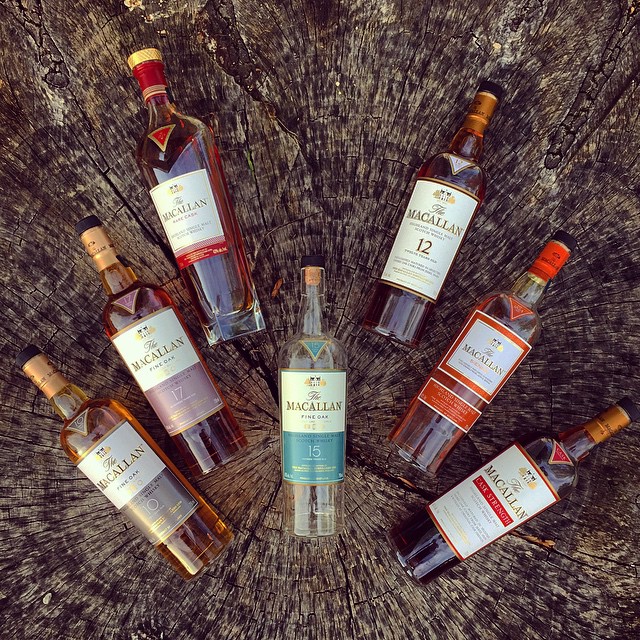 It’s time for another scotch versus scotch! Today we’ll compare two Macallans. More specifically, the 12 Year and the Sienna.

The Macallan Sienna isn’t actually offered in the US but on the last international order that [Scotch] and I placed, we decided to order a bottle and see how it compares to the American offerings. The Macallan 1824 series offered in the UK come in four primary offerings named after their colors: Gold, Amber, Sienna, and Ruby. Reading online, it seems that Macallan has gotten a lot of flack about offering scotch by color instead of age. Not that either color nor age is a primary determining factor in the flavors of the whisky but we all know how fickle people can be. We picked the Sienna because the Gold gets some pretty unpleasant reviews and the Amber reviews are mixed across the board.

Right off of the bat, the colors are almost identical under both incandescent and florescent lighting. Personally the color looks like mahogany tinted wet straw to me but if Macallan wants to call it “Sienna”, who am I to argue.

Nosing the two side by side is AWESOME, especially if you’re a big fan of sherry. (Who doesn’t love a good fortified wine?!)  The sweetness in the 12 year is much more noticeable than I could have imagined. The 12 year smells much closer to the cask strength when pitted against the Sienna. The 12 year smells thicker and richer where the sienna smells thinner; less like a fortified wine and more like a typical wine sans distilled additives. Where the Sienna is like a small grouping of orange trees, the 12 year is like walking through an apple orchard!

The Sienna has a soft mouthfeel and immediately shines with oranges and white grape raisins which only help to reinforce the lighter thinner nose. With water the Sienna opens a bit more and sherry soaked oak spices rise with just a touch of smoke. Very interesting. The 12 year is comparatively more tannic and the sweetness is much more subtle… like fruits dipped very gently in granular sugar subdued also under spices and oak. Like a sugar encrusted fruit pie baked in an oak pie pan. Incredible. With water, the spices are toned down and the flavor of the oak and woodiness get kicked up a notch! There WAS some sherry in there, wasn’t there?

The finish on the Sienna is… refreshing! Like the summer lemonade of scotches! The 12 year is much more serious and typical of a Macallan with oaken floral notes lingering on the tongue.

Overall these was an interesting scotch versus scotch session. These two drams really server two very different purposes. One is much more summer and one is much more fall & winter. Don’t get me wrong, they’re both delicious. 😉  I would not put them in the same boat in terms of richness and flavor though. They’re priced similarly but personally, the 12 year is the winner in my book. Hopefully this review will help you decide between these two bottles.